More than 350 years of Krijtberg

In 1628 the Jesuit Peter Laurentius arrived in protestant Amsterdam, where the Catholics were no longer allowed to practice their faith in public. They continued to celebrate their holy masses in so-called hidden churches. The first such church building for the Jesuit order was in a house on  Herengracht. In 1654 a new church was built behind the merchant house De Crijtbergh (which, literally translated, means “The Chalk Mountain”) on Singel. The name of that house, which has been linked to the church building ever since, supposedly originated from the chalk cliffs in Southern England, where the merchant trading ships sailed. The church could be accessed through an alley (Katersteeg) from Herengracht, which still exists today.

After the restoration of the episcopal hierarchy in the Netherlands in 1853, Catholic churches were allowed to be built in public again. Three houses were demolished on Singel and in 1881 the construction began of our current church, which was consecrated in 1883. It has been in continuous use ever since as the house of God for the Catholic community of Amsterdam and beyond, still operated by Jesuit priests and open to anyone who would like to step inside.

The church was  designed by architect Alfred Tepe (1840-1920). It was built in the neo-gothic style, which draws its visitors’ gaze upwards as soon as they enter. The Krijtberg construction was never completely finished , as  new elements have been added over time. For example, the confessionals date from 1889 and the most recent stained glass windows were installed in 1946. On the right balcony, the old and new features  meet quite literally. The abstract artwork of the Holy Spirit from the year 2003 is displayed beside the 16th century polychrome wooden wall statue of the Virgin Mary surrounded by angels, the last remnant of the first baroque church at this site.

After the Second Vatican Council, the church was  adapted to the demands of the renewed liturgy. The old high altar against the back wall of the apsis is now in use as a tabernacle, while the new altar has been placed in the heart of the community, dedicated for the celebration of the Eucharist. In 2000, the church was   fully restored, so that it could be admired in its previous colourful glory once again.

From the baroque hidden church 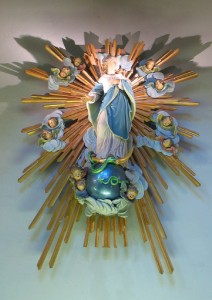 The Krijtberg is in plain sight now for the people of Amsterdam and the tourists to admire and visit. Some objects from the former hidden church have been preserved. It is possible, for example, to view an 18th century statue in baroque style of the Virgin Mary (pictured as the Immaculate Conception), situated on the right front side of the church on a balcony next to the confessional.

Church building hidden behind houses in the city centre: